I discussed the nature of "epic fantasy" in the previous blog post. An additional stipulation, however, is that my story must include dragons. Thus, I began the story with a scene involving dragons. Those who know me and my writing must also know I cannot do anything literary in a straight-forward manner. I thought it only right to give the reasons why. Any updates or news will happen here first! It was never my intention to write about dragons. Thankfully, my editor did. I have never forgotten that statement, probably because from that day forward dragons were firmly wired into mine. The book that emerged from these early discussions was a charming little parable called The Fire Within.

All the same, it did rather well. It got me into North America, launched me onto the New York Times bestseller lists, spawned a seven book series called The Last Dragon Chronicles writing about dragons bought me a house by the sea. I have a lot to thank dragons for. So why stop writing about them?

Well, from a very early stage of my fantasy career, children were asking me one particular question: Where are the bones? They kept asking the same one, over and over again. In time, the question was like a yapping dog. Why, I wondered, were people the world over so fascinated by creatures that had nothing but faith to support their existence?

I needed an answer. So I went in search of it. Like my fictional X-Files hero, Fox Mulder, I wanted to believe there was a truth out there, waiting to be unravelled. I thought about dragons an awful lot.

In my universe, they had always had a bad press — hoarding treasure, capturing maidens, generally causing havoc and destruction. I thought they deserved a break. I imagined them as highly-intelligent creatures, who believed, among other things, that the world was created by their own dragon deity.

It followed that dragons would be an enlightened species with a need to explore the limits of their universe.

~ a series of novels by Chris d'Lacey

Hence they were never native to Earth, but simply happened across our little blue planet as part of their mission to boldly go where no dragon had gone before. By making the scaly beings extra-terrestrial, I had overcome the indigenous issue just like that.

So I let them settle on Earth for a while or Erth as I called it in my final series just to see what they would do. They liked the geography of our world, especially the mountains and the composition of the air it allowed their fire sacs to ignite with sudden intensity.

In many ways, Erth was the perfect environment for them. From a writing point of view, this was excellent; it introduced an essential element of conflict into the books. The men in question, a prehistoric tribe of no fixed origin, were no match for the visitors.

The dragons were stronger, cleverer and more culturally advanced way more advanced. But therein lay another problem. For to arrive at the present day status quo of men dominating Earth and dragons being a remote memory, it had to be the dragons who suffered.

They could not simply come, see and conquer.Apr 09,  · Last week saw the UK publication of THE NEW AGE, the conclusion of my Erth Dragons trilogy. I’ve been telling anyone who’s interested that after nearly twenty years of writing about dragons, this is my last book on the subject.

Fiction Creative Writing Prompts. 1. Write a story about a monster that even dragons fear. 2. Write a story where a main character is given a very rare dragon egg to care for that is .

A Few Quick Words About D&D

Here are a few quotes about dragons! "A poet can write about a man slaying a dragon, but not about a man pushing a button that releases a bomb." - W.

H. Auden "Above us, outlined. 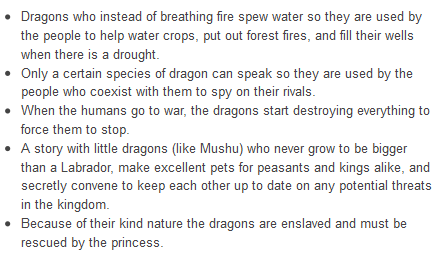 Writing Dragons Blog. 22 likes. I find dragons for you every week, while I write my novel Finding Dragons.

James Haeck loves telling stories, making new friends, and growling out the gnarly voices of chromatic dragons to his terrified players. He's always working on the next D&D project, whether it's editing EN World EN5ider magazine, designing for the D&D Adventurer's League, starting kobold revolutions at Kobold Press, or even collaborating with Matthew Mercer on the Critical Role Campaign Guide.

I find dragons for you every week while I write my novel Finding Dragons.